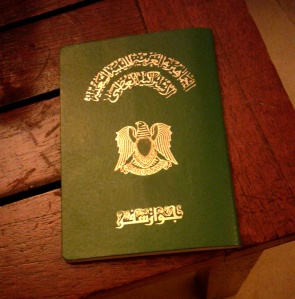 The infamous green Libyan passport, soon to be nothing more than a relic of a bittersweet era

Libyans don’t agree on much these days. But there is one thing that seems to be universally accepted; the quality of life in the country has dive-bombed after the 2011 revolution. Aside from the physical struggles to achieve the most basic day-to-day tasks, or the staggering loss of life, there’s another more abstract concept that Libyans yearn to have; leadership. Or, to put it another way, a strong sovereign nation.

The void of a national authority that has some respect (or at least sway) on a global level is most felt when travelling abroad. Since the revolution and subsequent wars, it has become increasingly difficult to fly in and out of the country. The number of countries that allow Libyans to enter visa-free can be counted on one hand, and even to these nations, heavy restrictions have been placed.

Historically, the ease of travel in Libya has fluctuated between simple enough to horribly frustrating. There was a time (or so we’re told by our parents) where Libyans could travel to most countries easily and be treated with the utmost respect. The Libyan passport used to carry significance abroad. Fast forward to the Gadhafi-era sanctions imposed on Libya, and all flights in and out of the country were completely stopped. Anyone who wanted to travel abroad had to take a car or bus to a neighbouring country (often Tunisia or Egypt) and fly from there. During the more difficult trips I take now-a-days, my parents like to remind me that they once had to drive the 24+ hour trip from Benghazi to the Tunisian border, and get searched by border guards, often in extreme weather conditions.

Fast forward to just before the revolution, and aviation in Libya was picking up. International carriers offered flights from Libyan airports to a wide range of destinations, including London, Rome and Malta. Libya was beginning to reconnect once again to the rest of the world. Sure, our hand-written bright green passports elicited a few raised eyebrows from customs, but no one had any reason to think badly of Libyans flying to other countries.

And then the revolution happened, and the aviation industry went down the drain. Benina airport has been closed for over a year, Sebha airport for almost two years, while Tripoli International Airport has been reduced to ash-covered arches standing in the middle of smoldering rubble. Many of the planes belonging to the Libyan Arab Airlines, Afriqiyah Airways and Buraq Air (the three biggest Libyan airlines) were lost in the attack by Fajr Libya on Tripoli’s airport. (Meanwhile, a new airline has miraculously appeared, going by the name of Libya Wings. Its history, like its sudden appearance, is shrouded in mystery and controversy).

The few smaller airports that still function in Libya (Maetiga, Labrag and Tobruk) are woefully unequipped to deal with the number of passengers and flights that have suddenly been forced to resort to them. Labrag airport in particular has gained a notorious reputation due to the staff’s tendency to randomly prevent passengers from flying for any number of personal reasons. Maetiga airport, purportedly run by a militia, has enacted a primitive rule whereby young women are not permitted to travel alone unless a male relative signs a consent form. A few airports in the South (Ghat, Temenhint and Kufra) are still limited to local flights, which are anyways still badly needed as the roads in and out of Fezzan become increasingly dangerous. The only international flights available to Libya these days are to Istanbul, Amman, Tunis, Khartoum and Alexandria.

These cities, which are jokingly referred to as “the new Libyan capitals”, (on account of the high influx of Libyans who pass through them), have recently put in motion more restrictive measures for Libyan citizens. Istanbul, shortly followed by Amman, now require visas for Libyan citizens. Tunisia has “temporarily” rerouted all Tunis-bound flights to Sfax airport. Aside from these destinations, many countries will not grant Libyans a visa due to the current state of affairs in Libya.

Another facet of difficulty was added when it was declared that new electronic passports were to be issued for Libyan citizens. The green passport will soon be obsolete (any passport issued pre-2008 is already obsolete in Tunisia) and citizens need to get the new passport as soon as they can. This has proven to be a Herculean task, as the online registration site for a passport appointment is either overbooked or filled with glitches, and people have begun resorting to bribery out of desperation, adding another unneeded layer of corruption. I’ve heard of bribes reaching up to 3000 LYD for a single passport. Even ‘wastas’ (connections) are no guarantee of getting a new blue passport. If you don’t have the older green passport, you’re essentially stuck inside the country until you can somehow miraculously get a new passport. For Libyans who depend on overseas medical treatments (which, considering our local heathcare system, is a lot), this passport crisis can be fatal.

If you can manage to get a new passport, and a visa to the country you need to visit, and you managed to book a flight (which will probably be delayed by several hours, which is the norm), you will then need to tackle another beast; the black market currency rate. Since the Libyan dinar is no longer a hard currency, you cannot convert dinars at other airports. With the banks closing off most financial services, Libyans are stuck with the black market exchange, in which the value of the dinar has been steadily plummeting. A US dollar is now worth over 3 LD, meaning any trip you plan could end up clearing your savings. If you run into any trouble while abroad, whether financial or otherwise, there’s no guarantee that our ineffectual embassies will help you out (one embassy per government, in some countries) as they are too embroiled in the legitimacy crisis.

Picture for a moment the feelings of the average Libyan citizen, who, after suffering through a dictatorship, war, and terrorist invasion, is now treated sub-humanly by other countries, because they either don’t want you in their country for too long or because they fear that you might harm them. Imagine being utterly helpless to even get a new passport for your ailing parent who needs medical treatment abroad. Imagine losing most of your life’s earnings over what should be a typical trip to a neighbouring country, or having to sleep in an airport because of the constant flight delays. Just like the days of the sanctions, Libyans are being treated like pariahs and are forced into isolation. It’s a humiliating experience to be told to stand in a “special” line and watch as everyone’s bags (whether old, young, sick, handicapped) are thoroughly searched, enduring scornful glances from the local authorities because you happened to be born in the wrong country. Especially for Libyans, who have a lot of pride (perhaps the last remaining evidence of a better time) this kind of treatment is hurtful.

There is one type of Libyan who hasn’t experienced much trouble with travel, however. At Labrag airport recently, I saw members of the House of Representatives, the Transitional Government and the Constitutional Drafting Assembly, all milling about waiting for a flight to Tunis (no doubt to cozy up to the new president of the GNA). In their hands was the red diplomatic passport, just another symbol of the ever widening chasm between the average Libyan citizen and their representatives. Their obliviousness to the struggles of the citizens they represent is only too apparent in these kinds of situations.

The aim of writing this post isn’t to set up a pity party, but rather to raise attention to this issue. The media, government agencies and even the airlines themselves are indifferent, particularly since they don’t hear a unified voice calling for improved conditions and hell, even just for a modicum of respect and help. Libyans deserve better than this, and war or not, things can, and SHOULD, get better.